When NPR, CNN, and Forbes need expertise on social media and the law, they turn to Ethan for his commentary.

Okay that sounded a little cheesy. I’m also referring to myself in the third person here – which is lame. But I think you get the idea. As a social media law attorney, author, professor, and social media marketing consultant for lawyers, I’ve had the opportunity to study many different angles of how social media impact the law and how attorneys can use social media in their practice. As a result, NPR, CNN, and other news organizations frequently seek my advice or invite me to their programs to discuss trending topics. Here’s a few recent programs and articles from NPR and CNN:

Social media legal issues are impacting cases and controversies from the United States Supreme Court to the President’s Twitter use. South Florida’s NPR affiliate WLRN interviewed me to address these hot topics in social media law.

The upsurge in social media use by professionals generates legal and ethical questions, which require care and consideration when promoting products and services. For example, does an attorney’s Twitter comment on an issue constitute advertising? South Florida’s NPR affiliate WLRN interviewed me to address these new social media law trends.

“There are many issues and pitfalls to consider:  an employee’s brash tweet or text to thousands could erupt into a lawsuit . . . and what sort of Facebook post or photo can lead to a dismissal?” Listen to find out.

“Join us for Thursday’s Topical Currents when we discuss the legal ramifications of social media, with Nova University professor Ethan Wall. Employee use of social media is a burgeoning problem.  Wall has written “Fire Over Facebook.” And more.” 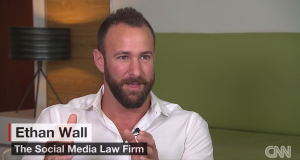 CNN featured The Social Media Law Firm in their news story about successful entrepreneurs that turned to co-working spaces to serve as their headquarters. “Tomeka Jones looks at a place where talented professionals come together in a shared workspace to be creative.”

“These (subpoenas) are becoming more and more common,” said Ethan Wall, a Miami-based intellectual property attorney. “And courts are granting law enforcement pretty big latitude when it comes to getting Twitter records with subpoenas.” Though social media companies often strive to garner user confidence by securing their private information, “when it comes to imminent physical harm, the First Amendment has much less protection,” he said.
Forbes – 5 Steps for Banks to Avoid Problems with Regulators When Using Social Media – April 29, 2017
Community banks and credit unions can use social media to level the playing field with big banks. With a thoughtful, and sometimes, inexpensive social media and digital presence, a smaller bank can resonate with its community and engage with existing and potential customers in their area. But what about banking regulations? How do they apply? Forbes turned to me to better understand the challenges that banks and credit unions face when using social media.